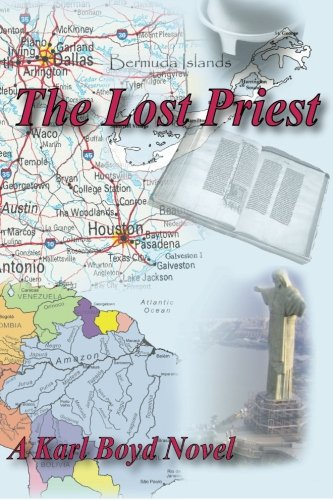 about this book: About the cover:

The old saying, "It is difficult to tell what a book may contain by looking at its cover", is true.

So, you are on your computer checking the books on David's website, and you happen to notice the title: "The Lost Priest".

And naturally; you believe this is a book about religion – Wrong!

Although this novel is as thick as a bible, plus one is featured on the cover together with a Priest's collar and the Statue of Christ in the Andes; still; this is not a novel that has religion as its base.

Then you note there are three entirely different maps interposed on the cover: Texas, Bermuda and Brazil, and may wonder what they have in common. The answer is: A lot!

The title of this novel evolved from the first featured adventure, when Father Tom Fitch travels to Brazil to serve as a missionary to the remote tribes along the mighty Amazon River and inadvertently incurs the wrath of an evil medicine-man, Narro. Tom becomes Narro's prisoner, and his captor intends to sacrifice the priest to his own spiritual God at the next full moon.

Synopsis of "The Lost Priest":

"The Lost Priest" contains two separate, yet conjoined books; "The Lost Soul" and "The Lost Spirit". Both have a wide variety of characters; family members, friends, lovers, wives and husbands of the Fitch family, known and respected throughout the 21 square miles of Bermuda.

The matriarchs, George and Pearl Fitch are both doctors of surgery and general practitioners. Their twin sons, Tom and Tim, (who are the main characters), are a travelling Priest and a general contractor from Texas, respectively, which seems an out of the ordinary combination until you learn their individual background and desires.

The initial adventure reported above is exciting enough; however, the journey is only beginning. When Tom is reported as missing, Tim follows him to Brazil, where with the aid of a helicopter pilot, a schoolteacher, a native guide, and an explosive expert, he attempts to rescue his brother. Yes, again; an odd combination, but that is the fascination of "The Lost Priest" – throughout each exploit, as each situation occurs, the novel joins several people of different backgrounds into one cohesive group with a common resolve; their salvation.

Combined with the remainder of the Fitch family, each of the above characters plus yet another diverse combination of a married couple from Germany, a nurse from Peoria, IL, a charter boat captain and his sweetheart, and the Islands' resident drunkard, together with a Bermudian Police Inspector has his/her/their venture to reveal for your enjoyment.

Their individual stories are woven together to form a masterpiece of mystery, suspense, deceit and love; while along the way heroes emerge from timid souls; cowards are revealed for who they are, and more than one person questions their faith or finds redemption in the strangest of places.

Atop all of this, each of their lives is collectively threatened by a common veracious enemy; a great white shark that makes the one in "Jaws" look like a minnow in comparison. Fate and determination to succeed combined with time and location decides which will live and those that will never again see the beauty of Bermuda, Brazil or the United States.

Reviewers claim: "The Lost Priest" is a romance novel masquerading as an adventure story.

Now, it is up to the individual reader to decide if they are correct, or if their comments should have been reversed. Either way, "The Lost Priest" is a novel you will remember and tell your friends to read. Enjoy!

I awoke in the middle of the night with the thought of a man in a helicopter searching along the Amazon River for his brother. (I tend to get my best ideas while attempting to sleep.) So, I got up and began to write, and for the next eight years, "The Lost Priest" grew is size and volume as I kept re-editing the contents and adding more adventure. Finally, I decided the novel was complete and any further changes would just delay the publishing.

My wife, Carol, who is my greatest critic and best reviewer in the world "made my day", when she told me "The Lost Priest" was my finest effort. I believe you; along with most of my fans will agree.

Anyone who loves adventure, suspense and mystery with a little romance thrown in for good measure will enjoy "The Lost Priest".

If you have read one of my other novels, you know I love to include several "side stories" within the main theme to provide the readers with more to enjoy. Thus is the case here and I believe you will find each interesting enough to keep you involved until the final page.

One day in the future, I hope to add to this work by addressing the lives of the younger people you will meet. More adventure can always be found, if you look in the right places. Or, sometimes it finds you.

In addition to "The Lost Priest", I have written seven other novels of mystery, suspense and excitement. A synopsis of each can all be found on my website: www.karlboyd.com 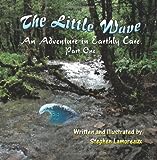