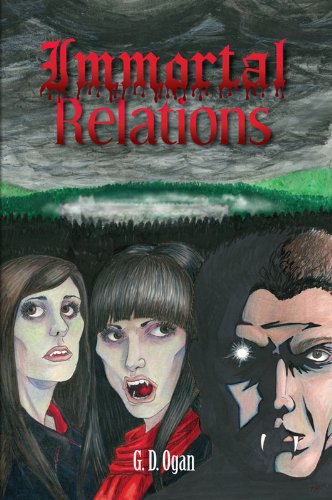 about this book: Why I started writing the "Immortal Relations" series:

When I was a child of six or seven years of age, my mother said some things I didn't understand such as, "He is over there with that woman!" and "He has had a child with that woman!" When I asked what she was talking about she wouldn't elaborate further. Later, she said, "I may have to leave your father, what do you think about that?" Not being of an age to fully comprehend, but still old enough to be protective of my mother, I said, "If he has been mean to you then you should." Well, nothing more was said and all that angst seemed to go away when my father returned although they never slept in the same room, but as I was just a child it never dawned on me to ask why.

It wasn't until both parents had passed away that I felt that I had to go through all the many, many file cabinets my father had. In the back of the bottom drawer of my father's oldest file cabinet I saw a very old letter sized envelope yellowed with age. I already had over forty, fifty-five gallon industrial trash bags full of old papers and files from as far back as the 1930s. I was relieved to be almost finished but when picked up this empty looking envelope to toss it in the trash; I felt something inside slide and heard a "click." Realizing something small was inside I thought, "Probably a receipt for something" and I tore it open. Inside was a very old black and white photograph of my father standing in front of an ancient building with a clock face on the side behind him. I turned over the photograph and recognized my father's bold script, "Prague Czechoslovakia." Looking underneath his writing I saw, "I will always be waiting here." This was written in a very elegantly flowing female hand. It took me a moment to realize what I'd stumbled onto, it was as if someone took a baseball bat and hit me right between the eyes. All the things my mother had said in my youth came flooding back into consciousness.

That night I couldn't sleep and there was no one around with whom to discuss what I had found. I got up and went to my computer and like a man possessed started writing. The first pages of "Immortal Relations" recounts this event, including the picture I found. The story itself grew from there into a story of how two people, one considerably more mature in age found each other and despite a serious "difference" was able to confirm their mutual attraction and consummate their love. It is a story of redemption where the lady believed she, her adopted daughter and others of her kind were beyond redemption and how the man changed in so many ways to accept a totally new "life" as a protector of innocent humans by losing his mortality. Evil exists in many forms and the coven of guardian vampires struggle to defeat rogue vampires intent on destroying the good vampires by any means available, so the evil ones could feed unfettered. They attempt to cement their control over humans through the theft of nuclear, chemical and biological weapons. A symbiotic relationship is established between the guardian vampires and humans permitting elements of the Czech military, the British Army and Royal Marines, as well as the military of the Russian Federation to deal effectively with various threats.

The story is for mature adults, not for children or the prudish. Explicit togetherness is detailed and during consciousness-transference training each partner enjoys both the physical and emotional pleasures felt by their partner(s) and there are scenes of multiple partners. Because of the author's military background, actions during warfare and combat are graphic at times. Medical research is also discussed along with diseases such as Bubonic Plague that may be unpleasant to read for those who are squeamish. It is a story of empowerment for females and one of unconditional love for males, both of whom have said they enjoyed reading it.

Here is a small portion of my favorite comments by a reader: "Being a bit of a vampire-phial, I find myself constantly searching for the next vampire series to reach out and grab, or, more appropriately, bit me. I believe I have found my holy grail of vampire novels."