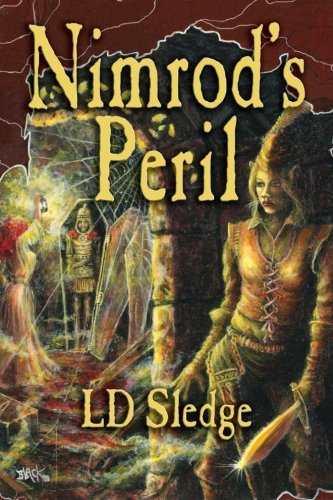 about this book: Nimrod Woodbine, a young Apprentice Wanderer, has just begun his First Journeyman Walkabout when Musette, his traveling companion, is kidnapped by a big, winged man, who flies off with her clutched to his chest. Nimrod sets out to rescue her.

Musette is a beautiful, human sized mouse who wears snug, gray leather pants, a dark jerkin, and a cocked hat sporting a little firefeather. She is shorter than Nim by a head. Nimble and trim, with fine gray down on her face, and soft brown eyes set above an upturned nose and full pouty lips, she is as pretty as any girl in his eyes. They can be only friends, because she is a mouse and he is human. He loves her nonetheless. They are asleep around their campfire when Nim awakes as a huge, ragged, winged man flies off with Musette cradled in his arms. Nim races after them but loses them as they disappear over the trees.

Nimrod learns that his beloved Musette was abducted by Nymphae, the insatiable queen of the island kingdom of Eros, who makes slaves of men, and uses their essence to maintain her incredible beauty. She uses them up, and stores their living husks in her dungeons to terrorize her people. She thinks that Nimrod has such purity of essence that he will launch her into immortality, and he must come to her voluntarily, and he will try to rescue Musette.

Nimrod has to cross a terrifying miles deep and miles wide abyss known as The Void. In the strange country beyond the Void he befriends Finetune, a poet-lawyer wannabe warrior, who goes on his quest with him. They encounter many dangers, and bizarre creatures on the way. Nimrod has to lose his innocence to lessen his value to Nymphae, and that is accomplished.

Musette escapes her prison and barely escapes many dangers that live in the castle underground, learning things that help in confronting the powerful queen. Nymphae then sends the big winged man to find Nimrod, but he arrested and taken to jail. Finetune defends him in a very funny trial for criminal exposure.

Nimrod's Peril is a love story of a different kind, an exotic adult fantasy thriller with a few dark corners, points of high hilarity, and a feel good ending of triumph of good over evil.