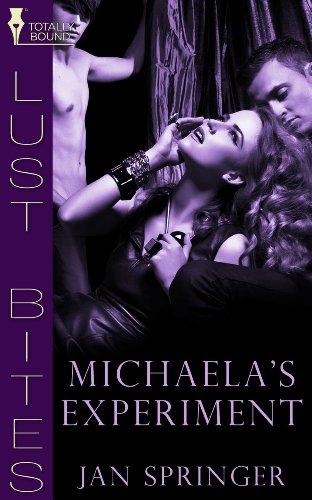 about this book: Michaela's Experiment is Book Two in my Sex Outlawed series but it can stand alone. If you enjoyed the movie "Logan's Run" you might want to give this series a try.

In the future pollution has made the world unlivable. People are forced to live in self-sustainable cities within bubbles. Everyone is embedded with a Blocker which suppresses the human's urge to mate. Each female is forced to bear one child for her city. Sex has effectively been outlawed!

When Flynn Campbell and Bryce Davids meet the cute brunette who has been assigned to their illegal sexual experiment, they quickly whisk her off into a world of sizzling pleasure and scorching ménages. Easily addicted to the males and the pleasure they create, Michaela is determined to keep her newfound enjoyment a secret, even if it means facing Elimination if she gets caught by the Totalitarian government.