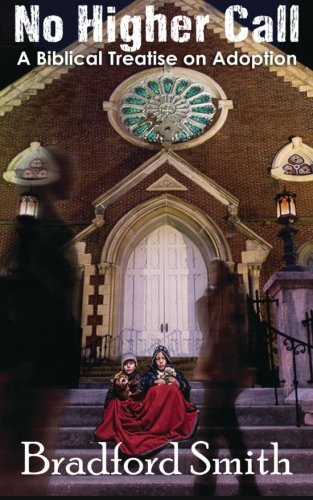 Book: No Higher Call - A Biblical Treatise on Adoption by Bradford Smith

about this book: I don't even really like kids. That is the moderately ironic part of this entire thing. I certainly never intended to be a father and so when my wife and I had our three girls, I figured we were through. The Lord it seems, had much different plans and now, six boys later, our home is bustling with life and hope.

It is interesting in reflection but, I've led men in combat during multiple rotations to Afghanistan and Iraq. I've led organizations of hundreds and currently, thousands of men all while serving bi-vocationally as a pastor. In spite of that, being a foster/adoptive parent is one of the hardest things I've ever done. Yet, other than being a husband, it is one of the most rewarding.

Ami and I felt called by our stance on abortion. Someone asked us, if we were against abortion, then were we willing to care for the unwanted children. We thought about it for awhile and concluded later that yes, we should be.

I'd never really considered what the Bible said about adoption until I happened across James 1:27, "Pure and undefiled religion before our God and Father is this: to look after orphans and widows in their distress and to keep oneself unstained by the world." This resonated with me and the more I examined the Bible, the more I discovered how the biblical narrative is replete with accounts of adoption. Indeed, the very concept of adoption is a manifestation of the Gospel itself and I thought, do God's people know about this? So I have been called to ensure that they do.