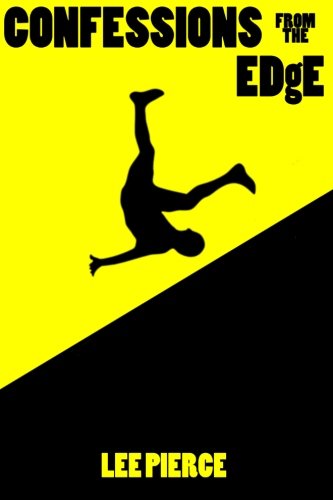 Book Reviews: Confessions From The Edge by Lee Pierce

about this book: This book is about the transitional period between graduating high school and truly becoming an adult. It is written as a series of flashbacks the main character has as he tries to understand who he is, who he was, and where he's going. The book is aimed at anyone who has been through or is currently going through this transitional time.

I was inspired to write the book after seeing so many friends, including myself, going through a period of arrested development before we truly began our adult lives. I always thought it was such an interesting time period, as everyone still seems to be deciding just who they want to be. The title comes from the idea that we all seem to be hanging onto the edge during this time in our lives, never quite sure who we are or what's going to happen next. To sum up, this book is all about the journey. It's about discovering life's little mysteries when it comes to life, love, and friends, and learning what's important to each of us.

Quick Read, But Nothing Outstanding

This was a decent enough book, an okay way to pass the time. It reads quickly and easily, and while there are some high concepts in it, it never tries to go over your head or blow your mind. Maybe that was my problem with it. It just never seemed finished to me, or never seemed to be all it could have been. Again, not a bad read, entertaining and all, just didn't seem to live up to the potential of what it could have been. [by Jacob Riley]

A Book for the Ages

If you took Henry Miller and Jack Kerouac, diced them up with a fine cuisinart and served them at a five star restaurant that used naked super-models doing pilates and deep knee bends as upper scale serving plates, then you might get the gist of Lee Pierce and his astute writing skills. In Confessions From The Edge he takes us to the brink of insanity and back again, not to mention the entire spectrum of emotions that lurk somewhere in between. It's a big book, but it's never dull. It's a semi faux inside look at the chronicles of his life. The book itself seems almost taboo at times. It's like watching someone secretly have sex with their knowledge. This truly is a book for the ages and I'm not just saying that because I'm his mother! [by Rick L. Basner]

As the douche bag (he isn't really, I don't even know him) who didn't let me be the first to write a review said, the formatting was a little strange. I too found myself forgetting about my reservations and became completely consumed by the authors words. I couldn't put it down. This book is a fun and adventurous tale of sorts that I believe strikes a nerve with anyone who's felt the sting of heartache and the fear of failure. [by King of the Deuce Deuce]

I downloaded and read this on my Kindle Fire. The formatting was a bit strange, but it was something I soon overlooked. I was able to do this because the story sucked me in. It's an odd little book, seemingly made up of vignettes or short stories that, with the aid of a framing story, add up to an interesting book. The author perfectly describes the feelings of those first years after high school, and manages to capture the disappointment felt by those too young to be part of Generation X, but too old to be Generation Y. It's full of wonderful quotable passages about life, love, friendship, sex, and death. Possibly the most interesting touch is a recommended listening list at the start of each chapter. I tried it out for a couple of chapters, and the music seemed to fit perfectly. For an author's first book (which I'm assuming this is) I'd give it an 8/10. [by Kyle Raines]