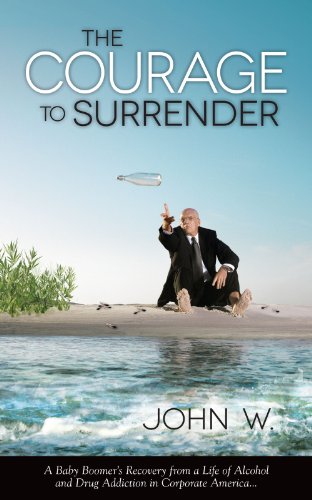 Book: The Courage to Surrender by John W.

about this book: The Courage to Surrender Short Synopsis

Unlike the memoir of a famous person, my story lives with the millions of baby boomers who passed me a joint and a beer in college and again at the corporate picnic. My memoir could be an outline for the lives of millions baby boomers who came together as a generation of change.

Before the Woodstock weekend in 1969, I graduated from college and married the mother of our love child, began training for a computer programming career, and a few months later got a high number in the draft lottery. My use of recreational drugs escalated from fun getting high to a craving that trumped my love for drinking beer.

I secured a project manager job at the corporate offices of a world-wide company which is where I entered a fast lane that became a free fall to the bottom of my life. My days began by smoking dope to medicate my alcohol ravaged insides, so I could tolerate the gridlock of the morning rush-hour. Business days included getting high at noon while on the way to seedy strip joints for a lunch of drinking.

The true measure of my self-destruction lay hidden on the dark side of my life where substances and out of control people influenced me into doing things I knew were wrong.

On Dec 17, 2001 my doctor showed me the results of my physical to explain that if I continued to drink I would die sooner rather than later. His prognosis scared me, so I poured out my alcohol and used an old AA schedule to attend the first of some 1800 meetings.

My story is full of experiences from my days at the bottom of life, through the first years in recovery, to a day in sobriety. My book combines short stories of life with vivid descriptions of actual situations that allow the reader to see this life-threatening disease from all angles. There are messages for the friends and family of an addict, so they can see that secrecy and enabling are part of the madness.

When you have finished my memoir some of the mystery that surrounds alcoholism and drug addiction will be answered: why people hit deep bottoms, fear based decisions, motive driven behavior, and how the disease twists the mind of the alcoholic / drug addict.

Although my past is a mixture of shame and guilt, I'll tell you who I was, what I did, and the lessons I had to learn more than once. Since Dec. 17, 2001 I have not found a problem or instance that I thought drinking and using would improve. I do not preach the virtues of sobriety I merely open my story for the reader to take what they need.

In retrospect, trying to decide on a title and cover reminds me of a project management approach I came to believe after decades of managing people and timelines. Work expands to fill the time allotted to it, and so I gave myself too much time to make these choices, consequently each took months trying to satisfy too many prerequisites. Finally I picked a weekend to decide and made my choice.

Clearly the most important characteristic is drawing a potential reader to scan my book to decide in seconds if they'd like to read it. For me, I used a government set of statistics that pegged my audience as some eight million baby boomers with addiction problems that began in the sixties and continue to drink and drug into old age.

It turns out that my writing style isn't as bad as I assumed, but my editing skills were as bad as I thought, so the rewrites and subsequent edits took years working part time, even with dedicated time it took months. Once again when my self-imposed deadline arrived and I was "sick of it" I loaded it to a Kindle KDP web page and started marketing it.