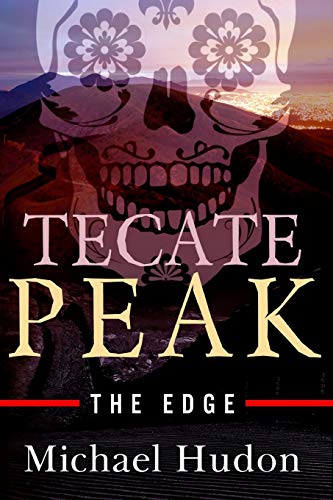 about this book: This story starts with action and ends with action. In between, in its almost 300 delicious pages, there are continuing and interwoven subplots packed full with passion, drama, love lost and regained, moral dilemma, brotherhood, and suspense, always sandwiched by more action. Tecate Peak traces the ebb and flow, the frenzy and the calm that is the day to day life of Harry Dugan, a cop from a family of cops who proves to be the epitome of the old adage "no good deed goes unpunished", who finds himself , at age thirty three, jettisoned from a promising career in law enforcement and a ten year happy marriage, with the requisite rose covered cottage in the New England countryside. Haunted by the appearance of wrong doing on the job, and a one night affair that didn't happen, banished by his wife, who says she still loves him, and betrayed by the man who was like a brother to him, his partner, his friend, Harry stumbles blindly into a world that's new to him.

Now, over forty, starting from scratch in a place he's never been, 3000 miles away from everything that is dear to him, his only lifeline is an old wrinkled slip of paper with a man's name and phone number, a man who is the cousin of his former friend and might help him find work in San Diego. There is an array of fascinating characters sprinkled throughout these pages. Among those are "Phil the Mill" Bradshaw, the boss and dispatcher of SCABS (Southern California Border Security), a sub-contractor to Homeland Security, and their co-agents, who earned the nickname by being a constant source of paperwork, a "paper mill", and Harry's new partner, Jake McGinnis, who has the potential to form another brotherhood bond, or because of an incident he observes with an illegal immigrant guide, to destroy what's left of Harry's honor and potential in life. Other actors in this drama include Jill, Harry's middle aged administrative assistant, who knows everything but keeps a low very profile; Abraham Fox, the big boss at SCABS, a most intelligent and decent man; the members of Elena's family, each bringing in a further element of mystery and mire; and (Spoiler Alert) Trish's longtime friend Maria, who is courageously instrumental in bringing the fat cat to justice.

Numerous minor roles are played by clerks, cops, waitresses, Harry's Mom. There are, by inference, the "ghosts" of Harry's past, his old dog Rusty, ex-wife Lara, and ex-friend John Saunders, who, by a most unusual twist, will actually enter the story and Harry's life at the end of these pages, brought in by a new surprise character whom Harry learns, although absolutely no one else knows or will know, is Harry's sixteen year old biological son! We meet women who are classy, astute, beautiful, giggly and silly, amazingly intelligent, poignantly ethical, or who combine all these qualities. We meet men who are strong and men who are weak, those who are heart breakingly good and those, like "El Cameron," ("The Shrimp"), a drug cartel leader, who are monstrously evil, and of course, some men who combine elements of both these qualities as well. "The Shrimp" has become aware that the two SCABS agents are getting precariously close to discovering his secret, a tunnel much like an underground business office, complete with airflow mechanisms, lighting and structural reinforcements. Other personalities include, El Coyote, a smuggler with a heart of gold, and El Gato Grande, the Big Cat, disdainfully called El Gordo by the unfortunate people, mostly undocumented aliens, who have had the misfortune to be "helped" by him, and who meets the definition of fat cat, both in appearance and in manner. In the span of the near 300 pages, they are able, with much bravery, strength, and quick thinking, to solve a crime, help save a cop's life, apprehend two low level drug dealers who try to escape in a van, and, almost inadvertently open the door, quite literally, to a Pandora's box of cartel corruption complete with threats to their own lives and those of people they care about.