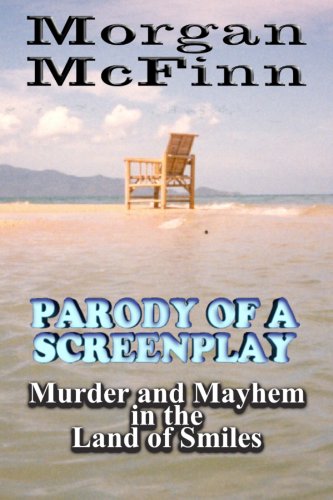 Book: Parody of a Screenplay by Morgan McFinn

about this book: One of McFinn's pet-peeves is how often people write books that they hope will be made into movies. McFinn feels that books should be meant to be books. Nevertheless, he decided to conform to the adage "If you can't beat them; join them". Thus we have this book called 'Parody of a Screenplay' which is exactly as the title implies. It is a frolicking satire that incorporates many of the popular aspects of Hollywood productions...murder & romance, a car chase & plane hijacking, exotic locales, engaging characters, a delightfully charming gay fellow, running from the police and, last but, not least, a talking animal.

The action/thriller takes place in Thailand and Cambodia. Our hero is constantly trying to evade the police who are tracking him down. Some people help him in those efforts and some people try to deceive him so as to collect the growing bounty for his arrest. Thailand and Cambodia may be 3rd world countries but, murder and plane-hijacking are still frowned upon. Buy this book and join in the chase!