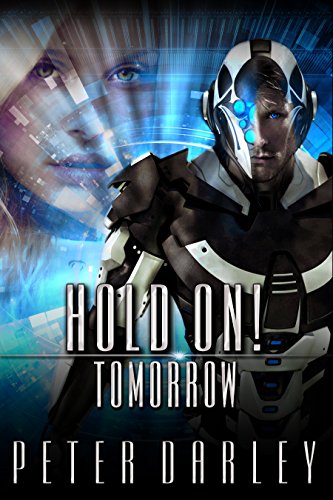 Book: Hold On! - Tomorrow - An Action Thriller by Peter Darley

about this book: "Hold On! returns for one, stand-alone, epic event.

The year is 2042. Twenty-six-years after the events in the Hold On! Trilogy, devastating earthquakes and tsunamis are striking in the most unlikely locations. Scientists have no explanation for the phenomenon.

Brandon Drake, Jr., (B.J.) a rookie government agent, courageously 'borrows' the INT-Nine, an advanced, prototype suit of armor in order to rescue his childhood sweetheart, Heather Addison. Their lives change forever as B.J. becomes the new Interceptor. However, tragedy strikes when the armor fails during a rescue.

While the world adores him, B.J is forced to become a fugitive when Congress orders Project: Interceptor closed down. His life is complicated further by his mother's belief that he isn't just his father's son – but his father reborn.

With The Interceptor on the run, new bonds are made and new heroes arise. To save the world from annihilation, they must join forces to discover the meaning of the mysterious abbreviation, C.O.T."

Back in 2014, during the composition of Go! – Hold On! Season 2, I knew how I wanted the original trilogy to end, but I also suspected my then publisher wouldn't approve. Primarily a romance publisher, they were adamant that all of their books or series' must have a HEA. Determined, I came up with an elaborate plan to get my own way. What if Run! – Hold On! Season 3 was not necessarily the end?

In order to persuade my publisher when the time came, I made a 90 second teaser trailer for Hold On! – Tomorrow (H.O.T.) with a particularly epic soundtrack. I didn't own the rights to most of the images or the music, but its purpose was simply an 'eyes only' production to tempt my publisher. In order that this had any chance of happening, I made Belinda pregnant toward the end of Go! That's how far back this goes.

My split with this publisher was disturbing and vicious. As a result, the teaser trailer was never seen by any of them. As it turned out, it wouldn't have been of any interest to them anyway. They seemed to have an aversion to promotional materials and success, which is what led to our conflict. Despite the magnanimous successes that followed, I ultimately decided to leave the writing world behind.

Then, something unexpected occurred. In August 2015, one week after the release of Run! – Hold On! Season 3, I was contacted by Italian drummer and critically-acclaimed rock producer, Pierpaolo "Zorro 11" Monti. He'd discovered one of his tracks in my bogus Hold On! soundtrack video on Youtube. He proposed that if I wrote another novel, he wanted to write and produce the official theme song for the book for release as a single – and I was floored! This never happens. I was, and AM, a fan of Pierpaolo's work, and I owned all of his albums. When one of your heroes contacts you with a proposal like that, I don't think I need to say what a rush it is. We subsequently became friends. Pierpaolo gave me the incentive to write Hold On! – Tomorrow – the book that was never going to be. H.O.T. is, without doubt, the product of a unique collaboration between storyteller, and the Gods of Rock.

The song 'Gotta Get Away' by CHARMING GRACE (featuring Nick Workman of international rock band, VEGA) is based on one of H.O.T.'s coolest cliffhangers. It appears on the compilation album, "We Still Rock" from Tanzan Music.

Pierpaolo opened a doorway for me to promote the book and the song, through numerous UK radio stations and newspapers.

All of the Hold On! novels focus on my all-time bane: characters with a totalitarian mindset. Basically – bullies. Controllers. In the first novel, it was the corrupt senator, his faction, and their quest for power and domination. In Go! this continued, but with the additional explorations of freedom-restricted convent life, and the current evil of human trafficking, which is sweeping our world with relentless zeal. I didn't think many would shed a tear at the thought of such monsters having the hell blown out of them.

As I led the original story arc to its conclusion, I explored the origins of Brandon Drake in Run!, and the horrors he'd endured at the hands of his foster father. I turned the concept on its head by making the hero the villain. The consequences of child abuse are considerable, and demonstrate yet another consequence of the abuse of authority.

But there was one monster I hadn't covered – religious cults. And this was going to be the most deadly cult the world had ever seen.

Suspecting H.O.T. would likely be the final entry in the series, I wanted it to conclude on the ultimate, epic ending. Where the original Hold On! Trilogy was the hypothetical TV series, Hold On! – Tomorrow would be the one where it hit the big screen.

Drawing references to the original Trilogy, and reintroducing past lead characters in their older incarnations, I created the story of Brandon Drake's son. His journey of self-discovery is juxtaposed with his quest to protect the world from the gravest threat it has ever faced.

With the rapid advancement of technology as it stands today, and 'Iron Man' style armor already in development for military deployment with the TALOS project, I was finally in a place where I could write the kind of story I'd always wanted to write, with demonstrable credibility. Hold On! – Tomorrow is an emotionally-complex, sci-fi, superhero tale.

H.O.T. also enabled me to resurrect my long-lost storyline, Firedrake – the arc I was ordered to remove from the first Hold On! novel by Writer's Coffee Shop, back in 2013. WCS subsequently disappeared without explanation. Firedrake is a rags-to-riches story like no other, and one that was enormously popular with my early beta readers. I was thrilled to announce its return to the Hold On! canon.

I feel confident that I have given the series a new, emotionally-satisfying ending, which is grandiose, definitive and conclusive, and I hope that you enjoy it.

Also, the video trailer is the best of them all. :-)


Exclusive and not available anywhere else!