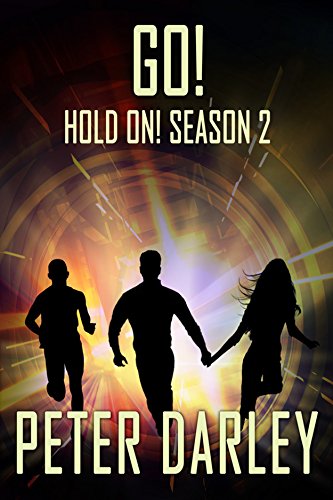 about this book: Go! – Hold On! Season 2 picks up exactly where Season 1 ended. It continues the action-packed tempo of the first book, but it also delves into more of the unexpected and some critical social issues, such as alcoholism and human trafficking.

"Brandon Drake has escaped from Leavenworth, aided by a new player who has entered the game. Tyler Faraday is the heir to an empire—and Brandon's long-lost brother.

Brandon is finally reunited with his lover, Belinda, but he is no longer the man she once knew. Haunted by memories of a life that never happened, he succumbs to the lure of alcohol.

They head for Nevada to find Brandon and Tyler's sister, Emily; a nun who has recently absconded from her convent. However, they soon discover Emily has been kidnapped by a human trafficking kingpin called Sapphire.

Their mission to rescue Emily propels them headlong into conflicts with road hijackers, the police, the army, a rogue faction of Homeland Security, and merciless killers, with Brandon's alcohol dependency placing them in further jeopardy.

The most explosive action in the series so far unfolds, as they search for the only one alive who knows Sapphire's location—a former captive known only as Siren."

After its predecessor, Hold On! was first picked up for publication in March, 2012, I began working on the sequel. One year later, my publisher folded a week before Hold On! was due to be released. At the same time, my agent retired. Go! was halfway completed, and these issues prevented me from writing another word. It wasn't just a book. It was a sequel to a book that no longer had a publisher.

Several weeks later, Hold On! was tentatively picked by Writer's Coffee Shop in Australia (the original publishers of Fifty Shades of Grey.) With another chance at publication, I resumed writing Go!, while working with WCS on Hold On! However, after four months, they went silent. To this day, I have no explanation for what happened. I had to cease writing Go!, this time when it was 75% complete.

Three months later, Hold On! was picked up by a publisher in New York (whom I am contractually prohibited from naming.) Naturally apprehensive, but driven on by the eagerness of my friends and fans, I finally completed the first draft of Go! in February, 2014.

However, the gauntlet continued. In February 2015, my publisher and I entered into a dispute over their complacency regarding vital marketing issues, which would've resulted in considerable financial losses to me. In vengeance over me questioning them, they unlawfully forced a termination for Go! on me, By this time, I was halfway through writing the third book, Run!—Hold On! Season 3. In order to salvage the series, I bought back the rights to Hold On! and set up my own enterprise.

The driving force behind me finally being able to bring Go! to you, was my editor, confidante, and wonderful friend, novelist, Patricia Harreld. Tragically, we lost her during the summer of 2017. There are no words to express my gratitude for all she did for me, both as my editor, and my friend.

The Hold On! series is based on cliffhangers, hopeless situations, and the fight against bullies, oppressors and controllers, in their many guises. It doesn't just talk the talk. It truly has walked the walk.

Exclusive and not available anywhere else!