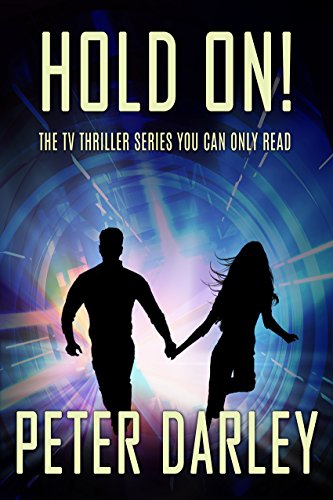 Book: Hold On! - Season 1 - An Action Thriller by Peter Darley

about this book: The Hold On! series is four novels that will appeal to fans of TV thriller shows such as 'Prison Break' and '24' . . . but with a stronger focus on romantic suspense:

"Corporate secretary, Belinda Reese, finds herself trapped in an inferno when her office building is attacked by apparent terrorists. However, she is rescued by mysterious interloper, Brandon Drake, an AWOL soldier. Using an advanced, experimental aircraft, he flees with her to his hidden cabin in the mountains of Aspen. There she learns his story – he's a man on a mission to thwart a corrupt, government conspiracy.
Brandon and Belinda's feelings for one another soon deepen. When they attempt to flee from America, they discover that now, Belinda too, has become a target of the conspiracy. A nightmare is unleashed upon them as the police, assassins, and government agencies drive them into relentless perils. Brandon's combat training and stolen weaponry are challenged to the limit in the face of overwhelming odds; a devastating, reality-shaking discovery further hampering his plight."

• "Think the proverbial roller coaster sans safety bar and forget about the brakes - it doesn't slow down. Darley writes with great passion and heart." — Jim Brown, TV anchor and best-selling author of 24/7 and Black Valley.

It's very much representative of who I am, and the type of stories I love to watch and read. After eighteen months of grueling research into US geography, military procedure, and intelligence (subject to some poetic licensing) Hold On! – Season 1 went through three publishers between the US and Australia. In 2015, I bought the rights back from my New York publisher and set up my own self-publishing business. Within six weeks, I had taken Hold On! to #1 overall on Amazon.

The sequels, Go! and Run! swiftly followed, and the Trilogy was finally concluded. Or so I thought . . .

Previously, I had posted Hold On! – The Soundtrack on Youtube, which featured the rock tracks that had helped me to drive the story. The title 'Hold On!' was a homage to the fact that it's the most often used song title in the melodic rock genre. One of the songs in the soundtrack video, "Highway of Love" by Shining Line, caught the attention of its creator, rock producer, Pierpaolo Monti. He contacted me with a mind-blowing proposition. He wanted to write, record, and produce the official theme song for my 'next book'.

Over the following year, I produced a new entry for the series while working with Pierpaolo on the song – and it was going to be huge. Critically acclaimed rock band Charming Grace had teamed up with Nick Workman, the lead singer of international rock band VEGA to record the single, "Gotta Get Away." The new novel, Hold On! – Tomorrow, was released simultaneously with the album "We Still Rock" (which featured "Gotta Get Away") and instantly became the first novel in history to come with its own soundtrack song. BBC radio and newspaper interviews followed, and I went on to become a publicity editor for the rock world.

Exclusive and not available anywhere else!

Video 1: Hold On! - Season 1 by Peter Darley Book Trailer
Video 2: The Hold On!/Gotta Get Away Interview on BBC Radio