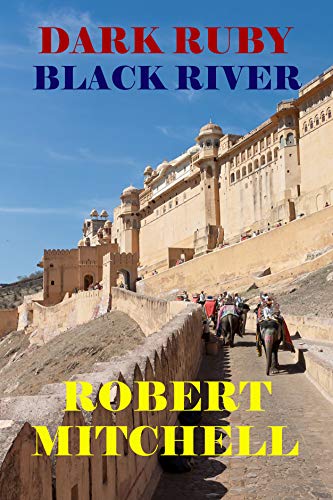 about this book: We went to India last year. We rode an elephant, sat in swaying buses on crowded highways, on trains jam-packed with commuters and on other trains shuttered and dim as we rattled through the night to our next destination. We walked the busy streets and laneways, pushing through the crowds and in turn being forced aside by motorbikes and cows. We dodged cow pats and piles of dog excrement and heaps of rubbish. But it was never dull. We visited the Amber Fort at Jaipur, the Taj Mahal and the cremation sites on the bank of the Ganges. The experience was too good not to be melded into a story, a story which would include some of the places we had seen and been a part of, and would include people we had met or bumped into or had just stared at like the more or less ignorant tourists that we were. And so I used the Amber Fort and the ancient stupa at Varanasi. And after reading the stories about the searches for hidden wealth in India which have been made over the years, I was certain that there must be rubies hidden somewhere. And so the embryo of my story was formed and all that was needed was the energy to weave the tale. Our tour of India was the first part of my literary journey. The sea-days spent on the cruise ship Sea Princess on our world cruise as I laboured over the keyboard was the second part. The story has now been told. All that remains is for it to be read.