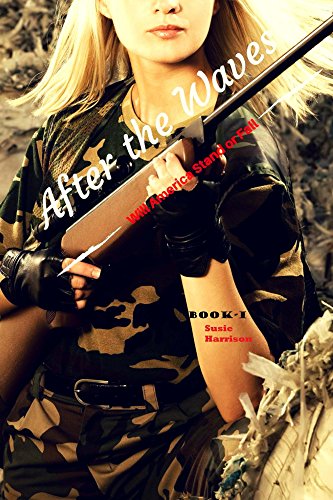 Book: After the Waves - Will America Stand or Fall? (The Waves Trilogy Book 1) by Susie Harrison

about this book: Has ranked #4 in one category and ranked in the top 10 to 20 in several categories throughout the 4 months since it's release.

'The Waves Trilogy', beginning with 'After the Waves' is a non-stop action thriller of what could happen in real life, from a conservative housewife's perspective.

What would you do if you had ONE hour to prepare for the end of the world as you know it? And after, who would you help… everyone? Do you have enough resources? Who would police your city? You and your friends?

As a Mom, how far would you go to protect those you love? Murder? But you might have to wait until book II, Waving False Flags to find out! Once you get to book III, Waves of Loyalty, a new beginning OR a new end commences.

• 'Great book and a great addition to your library. I love that the main character is a woman! She is a wife, mother, prepper, homeschooler and an all-around badass woman! She is smart, crafty and resourceful…' — Maly C.

• "As an apocalyptic book this one's different. I think that this would be how most of America would react. Other books usually have a hero who is a survivalist who saves everyone. I know if this did happen it would be like this book. Just average Joe's banding together to survive. I really enjoyed it…" — Rebecca Harper

• "Eek. Talk about cliffhanger ending! Even though I don't typically read "Christian" fiction, I took a chance and was pleasantly surprised. Although met political leanings are quite opposite this author, I really enjoyed this story and am anxious to read the next in this series…" — Geri


History of Author and Book:

In the early 2000's, I published two non-fiction real-life experiences that were fairly successful. Upon the sudden and brutal death of my 23-year-old son in 2009, I gave up writing. I had no imagination left. But when my girls started reading and listening to incredible prepper fiction books in 2016, my imagination sprung back to life. All those publications were about EMP's. And it was always man at the wheel, often with his gun and dog saving the universe.

I wanted to write again. After reading P.A. Glaspy's books 'When the Power is Gone' I contacted her. She encouraged me to give it a go again. Writing fiction was new to me, but my family quickly became engrossed with the first book and encouraged me to publish. So did Glaspy. The editing was the worst part… still, don't have it exact yet on Book I, but many have worked on the final product.

I learned NOT to just write freely, letting your imagination go wild, with the intentions of going back to fix it later. Even with a professional editor, you must always carefully write and edit by chapter each exciting moment. Than tends to slow me down a bit as in book three.

I designed my own covers. I wanted the reader to fill in with their own imagination the characters and settings, but I desired a little input and impact to draw attention and a personal touch!

The information in the book is also helpful with prepping information I've gathered as a hobby over time. Being resourceful is a gift that anyone can summon up in desperate times. You write about what you know. So I based my characters on real people, my family, my neighbors, and friends. This brought each character to life because they are real people. I knew to write about places I have lived so not to let a reader down with incorrect information on places I had never been.

It wasn't meant to be a Christian based book. However, the housewife is a woman of faith in Book I. She says her prayers like a good little housewife, therefore many readers have suggested After the Waves fit into spiritual categories. This is just one character. The book is more dystopian/action/adventure. In Book II you watch Sandi lose her faith and go off on her own as her character embrasses a new role... hunter.

I didn't want a repeat of an EMP. I did study and research older weapons 3rd world nations might use against the U.S. And while Tsunami bombs sound funny… if North Korea and Iran grouped together, this is a real weapon that could unexpectedly take millions of lives. I also researched YouTube on the potential use of this weapon. There are ongoing conspiracy theories about unknown foreign submarines parked just outside our coastlines currently.

After the Waves~ Will America stand or Fall has bigger issues at play other than small town survival. If our nation were attacked on a massive scale, how would our government respond? Our nation is divided. Could it be the perfect time for an inner coup to develop? After the Waves paves the way for book II and Book III to completely change the characters in their journey if they survive along the way.