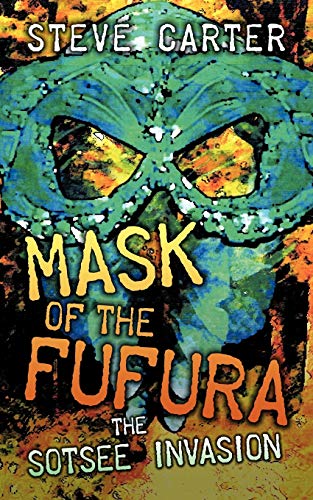 Book Review: Mask of the Fufura - The Sotsee Invasion by Steve Carter

about this book: This is an action adventure story, for the whole family to read. Placing in the Adventure fantasy genre, the story is primarily aimed at the pre-teen market, however, I have had great feedback from many adults who enjoyed the story. So in reality this makes it a book the whole family would enjoy. With the last decade being swamped by wizards and flying dragons, I have tried my best to come up with a fantasy story which is fresh, and tries to move away from what has been the norm these past years. The story is based on my childhood, in Africa. In this story, the reader sees life through the eyes of a child, who spends his days playing with his toy soldiers, and fantasizing that he can fly, in his grand father's model aeroplane.

Living in this fantasy world works for Ted, our hero, as the real world around him is a mess. He and his brother and sister live with their grandparents, as their mother is sick in hospital, and their father apparently has abandoned them. Ted's brother forms an allegiance with the local school bully, and together they make Ted's life a daily misery. That is until the day that Ted stumbles upon the Mask of the Fufura. This mask is a portal top another dimension. A world nestled right there in the garden of his grandparent's house. Down in this world, standing only a couple of inches high, Ted discovers a strange land. The land of Shimwari. Down here, he discovers that the troubles of his world, pale in comparison with what the besieged folk of Shimwari have to deal with. Not only does our hero have to battle gigantic snakes and spiders, but he has to lead the shimwarians against an evil war lord. And this warlord looks vaguely familiar to him.

The twists in the plot never stop, and once you start this story, you won't want to stop, until you work out what happens next. The book has just recently been adapted to a screenplay, by screenwriter Danek Stephen Kaus, and is waiting to be discovered for the big screen.

This is an action packed book, which keeps you on the edge of your seat. Highly recommend this book to all adventure seekers out there. Would make a great movie. [by David Bretman]

Video: Mask of the Fufura by Steve Carter