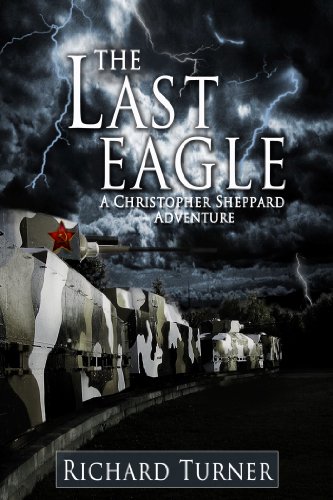 about this book: When an exiled Russian prince is murdered in England, former soldier Christopher Sheppard is inexorably pulled into a lethal game of cat and mouse. He soon finds himself pitted against deadly and ruthless Soviet agents who are determined to uncover the truth about the most guarded secret of the last Czar of Russia.

From England, to France, from Turkey to the vast open steppes of Mongolia, aided by a small group of Russian patriots, Christopher Sheppard races to rescue someone from the clutches of a cruel and sadistic warlord before it is too late.

Take a step back in time to the late 1920s, a time of change, a time when merciless men sought to change the world.

• "I was anxious to read Mr. Turner's book ... his military experience has obviously assisted in his ability to tell such stories, as The Last Eagle, providing detail and depth, which I was pleased to find" — Dennis F. Larsen author of The Living Hunger.

• "It all kicked off within the first few pages too and the first tough, gritty chapter gave me a feel for the rest of the book. It was a good introduction and I found myself wanting to read on." — Sarah H.

• "This book was a good Action/Adventure that never stopped; it's a real page-turner. The setting was Russia, Mongolia, and England during the Bolshevik Revolution. Turner immerses the reader in the story, drawing them in with excellent character building. I liked Christopher Shepherd, the main character, cared about what happened to him." — Teresa C.