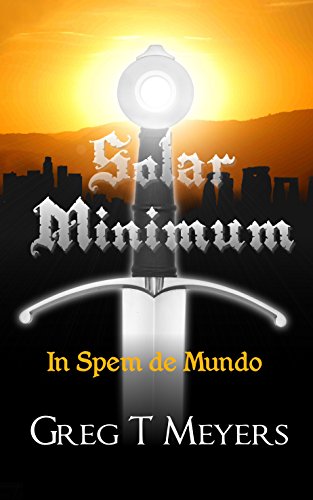 about this book: Every few hundred years, solar flares decrease to a minimum causing a substantial temperature decrease on earth (fact), but what else does the lack of solar flares effect?

During the last period of nearly zero solar flares (1640), the world was ruled and ravaged by myth, magic and endless war, but what if that was due to the way the world actually was then and not due to global ignorance as the modern world assumes? Our medieval ancestors were not derelict; they simply did the best they could in a harsh and brutal world where miracles were just the tender mercies of God.

In 2040, Western Europe is on the brink of war with a united Middle East and the United States has grown weary of being the world police. An obscure senate committee chaired by the most senior senator, Leroy Guiscard, accidentally discovers a global plot involving a powerful Turkish corporation, Toprak Esir, Inc. Toprak is using the Minimum conditions to advance their global agenda and they are the first to discover and use the changing natural laws to their advantage-laws that make the impossible, scientifically possible again.

Both forces of good and evil learn to deal with the power and challenges of a changing world which includes the reappearance of many mythological species. The Minimum conditions have a powerful effect humans, but none more than the ancient Anglo-Saxon blood line. Opposing sides are rushing to identify and win the few pure Anglo-Saxons left in the world, which will prove to be the difference in which side succeeds.

Military domination of the West is becoming meaningless due to the effects of the Solar Minimum and it appears the next world war will be fought with swords and magic, not technology.

According to NASA, our sun is currently several years into a real solar minimum period, which has already had an effect on global temperatures. Modern observations have never seen the sun so quiet and there is no rebound in sight as the number of fares continues to decrease year after year. Is our world plunging into a future medieval age?