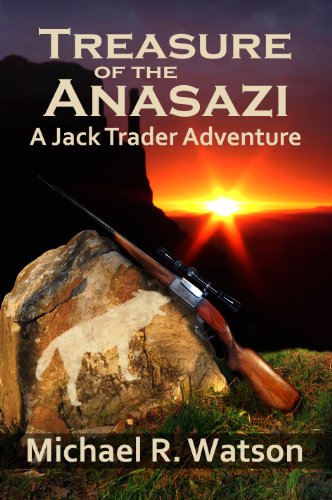 Book: Treasure of the Anasazi (A Jack Trader Adventure) by Michael R. Watson

about this book: The Anasazi of the Mesa Verde area are believed to have disappeared 800 years ago. Until they are discovered by a rancher grazing his cattle in the new frontier. The government soon steps in to protect the settlement and keep their existence a secret. The journal of a past Indian agent is found with information about the Anasazi and a treasure. No one believes what it says except for a couple of treasure hunters. What if it is true. The Anasazi are in danger. The park ranger is shot, leaving the problem in the hands of his assistant, Samantha Baker. The danger and the suspense grow. The lingering spirit of a young Navajo woman looks over the Anasazi. She asks Jack for his help at one of the cliff-dwelling sites. Jack and Samantha, former lovers, join forces.

I learned from my research that the Park Service did not allow women to be Rangers until the 1960's. This compounds Samantha's stressful situation as she tries to prove herself. The Anasazi are also referred to as the 'Coyote People.' In this story they have the ability to transform (shape-shift) when necessary.

Video: Treasure of the Anasazi (A Jack Trader Adventure) by Michael R. Watson