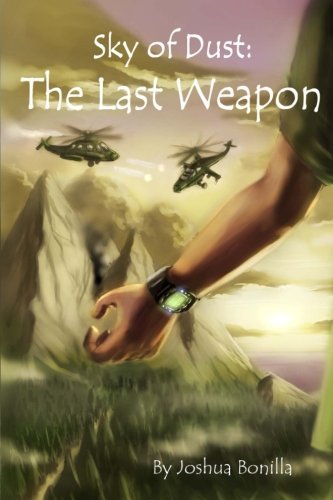 Book: Sky of Dust - The Last Weapon by Joshua Bonilla

about this book: I had the motivation to write this novel from a song I heard on the way to work. During lunch, I finished the first paragraph, and within a month I had finished.

The book revolves around Dalyn, a fourteen year old boy who has spent his entire life in a village in Renatus. Renatus is a government that rules eighty years in the United States future.

He had always had headaches, which is a big deal for the people that live in the post apocalyptic state. If you mentioned you had any head pains, the government would identify you as being infected with a deadly disease and would take you into custody for quarantine. Those people are never seen again. He has kept it a secret his whole life, with the exception of his best friend, Casey.

One day, Dalyn and Casey were heading off to detention, when their lives changed forever. An awkward turn of events reveals that Dalyn's dad, who had been missing for five years, was actually still alive and wanted Dalyn to join him in the real United States.

Armed with new found abilities, him and his new friends begin to unravel the mystery behind the controlling Renatus government, and the future of mankind.