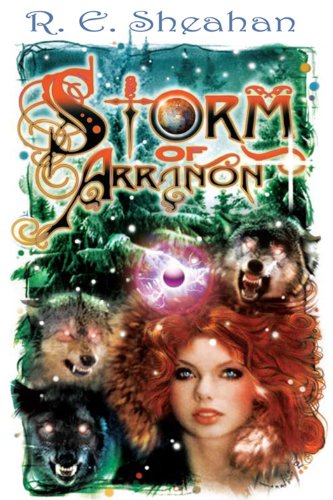 about this book: My name is Erynn Yager. I guess in Earth years I'd be about eighteen. All I want is to become a good Interceptor fighter pilot. No make that a great pilot, like my dad. Well, he's my adoptive dad. And he's the commanding general of security forces for our worlds. Some people think that's why I was admitted to Academy at my young age.

I never met my real father. I never met my mom either, not that I remember. She died the day I was born. Losing my parents wasn't the hardest part of my life. That I am, is.

You see my very birth was forbidden. I am a child of two worlds. My mother was from Korin, my real father from Arranon.

What has been difficult for me is adjusting to the abilities I possess because of my blended heritage. Abilities no one else I know of has. I can bend time, manipulate the electro-magnetic field around me, sense the emotions of others, and often see the future.

My whole life has been about secrets. Until General Cale Athru came to my home world of Korin as a military representative of his world, Arranon.

That was when I found out I am not the only one with a mixed heritage.

General Athru came to meet me and with a vital message for my dad.

A marauding alien society is intent on ravaging Korin and Arranon for their abundant natural resources, annihilating the two worlds in the process.

When a team of alien assassins attempts to murder General Athru, I stop them.

Now the aliens know about me and my extraordinary talents.

A cascading chain of events thrusts me on a journey through the mystical, but dangerous world of Arranon. The living consciousness of Arranon begins to communicate with me through the animals, the plants, and even the weather.

One thing I didn't see coming was Jaer, leader of Arranon's Anbas Warriors. I never thought I'd find love while running for my life from a deadly army of pursuing aliens.

But here's where things get really scary. Because of who and what I am, I may be our worlds' only hope for survival.

• From the Author:
I wrote Storm of Arranon as a Young Adult Science Fiction/Fantasy. But it seems adults are also enjoying the book!

I was so lucky regarding the cover art for the book. My neighbor at the time was a retired Hollywood illustrator that worked on several major science fiction and fantasy movies. Wow! He offered to create the cover and I love it!

• A quote from the Kirkus review:
"Erynn also brings a fresh perspective to a story that might otherwise be cliché. In a genre filled with male perspectives, a sassy female main character is a welcome change. With all the interesting ideas at work here, readers will likely want to check out the planned sequel."

Book two in the series, Storm of Arranon - Fire and Ice, is set for a November 2012 release.