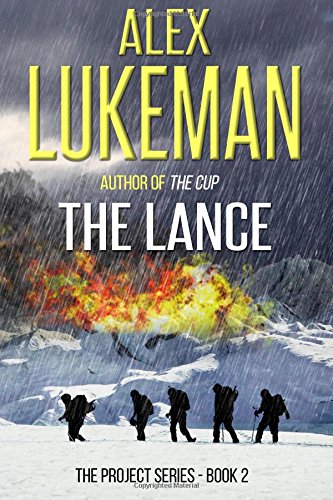 Book: The Lance - A Novel by Alex Lukeman

about this book: The Lance is a story based on fact, rumor and the history of Nazi Germany and Heinrich Himmler's creation of evil, the SS.

The Vienna Lance exists. The legend of the lance states that whoever possesses it holds the key to domination of the world. It is supposed to be the spear that pierced Christ's side on the Cross. Beginning with Constantine, every conqueror of Europe except Napoleon had it in his possession. Hitler seized it as a talisman of power in 1938 when he "annexed" Austria.

Himmler had a castle in Germany where he conducted bizarre occult rituals that used either a copy of the Lance or the real thing. There was also supposed to be a hidden Nazi base in Antarctica, never discovered after the war. This becomes the basis of the book.

The plot is set in present day Washington, Israel, Antarctica, Argentina and Virginia. There is a secret Nazi conspiracy to establish the Fourth Reich in America and complete the "Final Solution", Himmler's plan to annihilate the Jewish people. High officials in the US government are part of it. The plan is coming to fruition. Nick Carter and the Project must stop it.

I'm a history buff. The Lance allowed me to use historical facts and create a work of fiction that makes use of many unresolved rumors and questions revolving about Himmler's rituals and the Vienna Lance. It's a thrilling ride for the reader, at least I hope so!

Video: The Lance - This is book two of "The Project" series by author Alex Lukeman