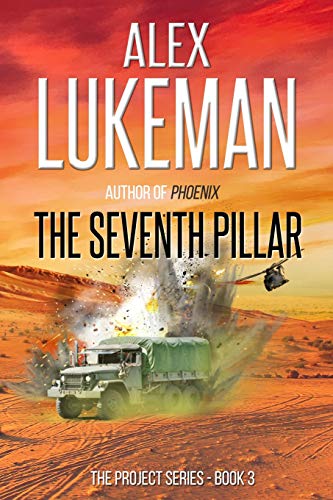 about this book: In The Seventh Pillar, an ancient order of assassins emerges from the dust of history, led by a fanatic who seeks to initiate war with the West. He acquires an ancient artifact that gives credibility to his mission and triggers a plan to bring about the Day of Judgement.
The book is number three in a series about a small black ops team called The Project, responsible only to the President. It stands on its own, but continues developing relationships between the protagonists that began in the first book, White Jade.

Nick Carter is a former recon Marine who leads the field team. He's got PTSD and an inherited sixth sense that sometimes warns him of immediate danger. He's deeply conflicted about his relationship with Selena Connor, a newbie to the team. Selena is an expert in ancient languages, an academic who has been thrown unwittingly into the brutal world Nick inhabits. She's a master of martial arts. She's still learning what it takes to be a member of a special ops unit. It's not easy.

The Seventh Pillar of Shia Islam is Jihad. There are two meanings to the word, which translates as "struggle". The peaceful meaning is universal to almost all religions: strive to build a relationship with God, build community, live a good life, be charitable. The meaning we are most familiar with is the permission and command to destroy the perceived enemies of Islam by any means possible. It is more than an instruction. To the fundamentalists, it is a command from Allah. We see the results of this insanity every day.

The book is thoroughly researched, as are all my books. If I haven't been somewhere, I spend a lot of time researching it, mostly on the internet. For example, I have been to Morocco, but I have not been to Mali. So I use what I know of Northern Africa and research the rest.

The book moves from Western Africa to America to the mountains of Pakistan and back. It's a page turner. If you like thrillers, you will like The Seventh Pillar.