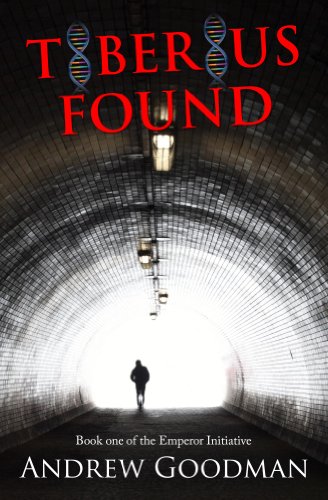 about this book: What would you do if you discovered your whole life to be a lie?

Daniel Henstock thinks he’s an ordinary schoolboy but on his sixteenth birthday his world is turned upside down. He is the world’s first one-hundred-percent genetically-engineered human - assigned the codename Tiberius - and Gregory Dryden, the man responsible, wants him back so that he can continue his deadly experiments.

Running for his life, Daniel flees to New York and is forced to go ‘off-grid’. In this near-future America, where the security-obsessed authorities require citizens to carry DNA cards, Daniel meets the feisty and beautiful Eleanor. But by falling for her, Daniel also puts her in terrible danger.

Daniel pursues the facts about his origins but is hunted by an agent sent by Dryden to bring him to heel. Can Daniel find out the truth whilst trying to evade those who think they own him? As his enemies close in Daniel must draw on resources he never knew he had to win his freedom - but in doing so he may be walking into a deadly trap ...

TIBERIUS FOUND is the first instalment in a thrilling series - The Emperor Initiative - that introduces an engaging new hero that will appeal to fans of Alex Rider and Jason Bourne."

I bought this book on my kindle and I couldn't put it down. The characters have a way of captivating you and the story line keeps you guessing right to the end. A fantastic thriller, which keeps you on your toes. An amazing new author on the scene and one I will be definitely keeping and eye out for. Can't wait for the next book please, Andrew. [by steffh]

Tiberius is a Good Find...

I've read short stories by this author previously so I was happy to see a full length novel published. I didn't do well in my English Lit. exams as although I read a lot I'm not much good at expressing what was good or bad about what I've read, but I'll give it a go here!

I'm sure many of us have wondered what might happen if we suddenly discovered that we had super-powers or something similar, and I like this particular twist. The pace was good, and I found it hard to put the book down. The use of futuristic technologies was believable and not overly-outlandish as I've seen in other stories.

I thought that the characters were all interesting - Brennan seems to have a bit of history to explore, I could use a 'Pickford' myself! No offense to Daniel (who is a bit of a goody-goody, but I guess he can't help it, having been 'made that way'), but I think my favourite character was 'the suit'!

There seems to be a lot of scope for further adventures here, both in finding out more about how Daniel came to be 'created', and with scenarios that he could become embroiled in. I hope there'll soon be a sequel.