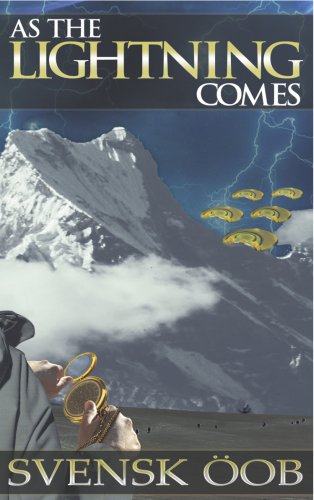 Book Review: As the Lightning Comes by Svensk Öob

about this book: As the Lightning Comes is a controversial new eBook which challenges Biblical conventions.

The plot follows a lawyer, John Marshall, who on a trip to South Africa involuntarily becomes involved in a cross-continental search to locate the Messiah who will save mankind from a meteorite storm and prevent the uprising of the Antichrist when he is given a mysterious key by a dying Eastern wise man.

The key is an ancient artifact that grants those who possess it access to the Tree of Knowledge - a subterranean installation that is the remnant of a long lost civilization that included the Atlantians. With the help of a Middle Eastern linguistic expert, Marc Arnold, and archaeologist Kirsty Gordon, John sets off to find the Tree of Knowledge.

But their quest across three continents is thwarted by dark forces seeking to possess the key in order to obtain absolute power.

• Motivation to write the book
At the age of 16, I saw what at first I thought was an airplane positioned over an open V shaped pass though the mountains. The object had the shape of a plane directly approaching one: flattish and tapering to the ends. Approaching planes also give the illusion that they are hovering, so initially I thought nothing of it. When the object had neither grown larger nor moved after a few minutes, I gave it my full attention. It struck me that had it been a plane, I would have heard it.

Suddenly the object moved upwards to the right at about a 60° angle at speed then changed direction and zagged upwards to the left. After about four zigzags, it ascended straight up at incredible speed until it was no longer visible

In my dream, which forms the basis of the events that take place in Chapter 48 of the book, I had a premonition of the world ending following a comet strike. In the dream I saw an approaching flotilla of 144 spacecraft each with a capacity of 1000 passengers, which had the presumed intention of saving part of the human race.

This action packed adventure has you on the edge of your seat, and keeps you guessing until the end. This book was kind of like the Di Vinci code on steroids. [by John]