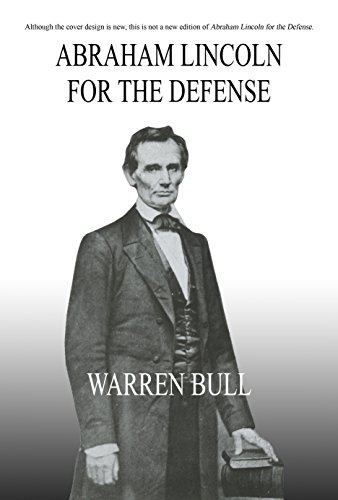 Book: Abraham Lincoln for the Defense by Warren Bull

about this book: • Writing Lincoln's Mystery

Abraham Lincoln for the Defense is not just a mystery I wrote about Abraham Lincoln, it is also I mystery I wrote with Abraham Lincoln. I was sitting in the library reading the Collected Works of Abraham Lincoln when I came across a letter he wrote to his best friend, Joshua Speed, on June 19 of 1841 about the murder trial of Henry and William Trailor. Lincoln was one of the counsels for the defense. He told Speed about the "curious affair" and "mystery" that remained at the end of the trial. He laid out the timeline, the characters, the physical evidence, the testimony of witnesses at the trial, and the verdict. Yet knowing all this and even though I was searching for a basis for a mystery novel, I considered the information for some time and reluctantly concluded that so much information was missing, that it was impossible to develop a credible story about what could have happened. At the end of the trial, even after the verdict, some people swore that Henry and William Trailor had committed blood murder. Henry and William, on the other hand vehemently swore that they were innocent and argued that it could be that no crime at all had been committed. I could not tell, since Lincoln did not know, who had done what to whom.

I was quite disappointed. In 1841, Lincoln was the junior partner in a law firm with a much more famous senior partner. He was not well known. He had only been practicing law for a few years. He was a minor player in local politics. He had broken off his engagement to Mary Todd for unknown reasons. Historians still argue about why.

What I didn't know was that Lincoln was not through with me yet. I as time passed, continued to read the Collected Works a little bit at a time and I came across an Editorial written on April 15, 1846 titled: The Trailor Murder Case Remarkable Case of Arrest for Murder. I thought Trailor Murder Case. I've heard that name before. Sure enough, it was Lincoln's reflections on the same case, five years later. By this time Lincoln knew, and spelled out who had done what to whom. But even knowing that only created a greater mystery about how the events transpired they way they did. In the editorial, Lincoln thoughtfully provided a list of unanswered questions. I realized that to create a credible story I would have to answer every one of them. But I knew if I could answer them, I would have a work based on a real trial conducted by Abraham Lincoln that so interested him that he thought and wrote about it for five years.

Eventually I was able to do that. Another gift Mr. Lincoln gave me was advice about writing the novel. Keep in mind that, apart from his importance in politics, Lincoln was one of the greatest writers in English of all time. I admit that I did not immediate recognize how valuable the advice was but Lincoln wrote in the editorial, "it is readily conceived that a writer of novels could bring the story to a more perfect climax."

A number of years and as Lincoln might say, "a myriad" of revisions later I realized how right he was.