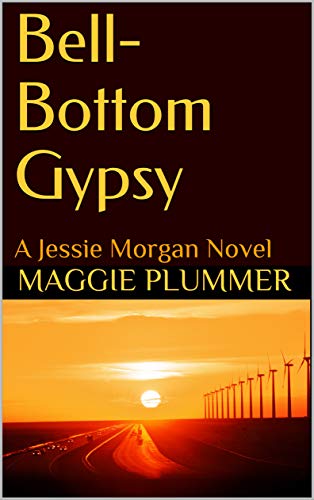 about this book: Bell-Bottom Gypsy: A Jessie Morgan Novel is a real departure from my two historical novels, Spirited Away and Daring Passage. It is set in the early 1970s, following twenty-year-old Jessie Morgan as she drops out of college and hits the road in her Volkswagen Bug convertible. Determined to test herself and experience everything, she wanders back roads from Kentucky to Key West to Montana.

In Kentucky, she meets Twisty, who follows her to Key West and eventually becomes her ultimate test.

Bell-Bottom Gypsy takes the reader back to an era in which young women struck out on their own and did things they'd never been able to do before. The sense of freedom was dizzying, and the choices made were not always the best.

"The only way to get there from here is to read a novel like this," says reviewer L. W. Browning. "A full five stars for this wonderful, nostalgic story that happened once upon a very special time in America... this book is priceless."

The novel is loosely based on my own 1970s experiences on the road, with a loud emphasis on the word "loosely." Much of Bell-Bottom Gypsy is pure fiction, embellishment, and wishful thinking.

The first in a four-book Jessie Morgan Series, this novel is recommended for mature readers due to 1970s-era sex, drugs, and cussing.

I really enjoyed this journey with Jessie, sometimes fast-paced, and other times taking a minute to breathe in the scenery. We've all met characters on our own journeys in life, Ms. Plummer really brings them to life with dialogue and action scenes. Looking forward to more trips with Jessie! [by Liz Presley]

Looking back at wandering through the 60's

Enjoyed my read of "Bell-Bottom Gypsy". Brought some nostalgia to mind of my own "coming of age" in the late 60's and early 70's, hitch-hiking across the U.S, engaging in recreational drinking, and, of course, sexual adventures. Feel fortunate to have stepped off the beaten track to explore who I was in those days. And to read the story of "Jessie Morgan" doing the same, and not really knowing where she was going, or why, re-kindled the wanderlust of my youth.

The book is an easy and quick read. Hemingway-like in that the flow of the story is anchored in conversation. Puts you right there on the barstools, diner counters, in her VW bug cruising down the highway with wind blowing in your face.

And "Jessie" is no church mouse, but meets the good, bad, and ugly characters on her journey. Hob knobs with all social classes, and does not filter language or social problems, from the reader. Tells it like it was, in those days.

Ending the story with the reader wondering where Jessie will go next, and what adventures await her, is a catchy literary device, much like the Saturday matinee serially based movies I watched as a kid. Awaiting the sequel!