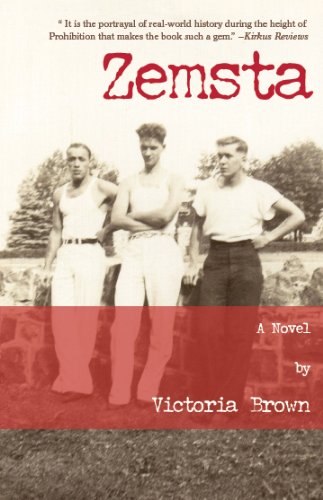 about this book: Several years ago, I was roaming around the Internet when I came across a startling statistic: In the 1920s, Akron, Ohio had the largest chapter of the Ku Klux Klan in the country.

That one single fact was the spark for my first novel.

Zemsta takes place in Akron, Ohio during the years of Prohibition.

My mother was born in 1915 and celebrated her 97th birthday this last May. Both she and my father grew up in Akron, Ohio in the '20s and '30s. My paternal grandmother and great grandmother ran a boardinghouse, which is one of the locations in the novel.

During the process of writing Zemsta, my mother and I had many conversations about the times and specific events. There's one passage in the book about two of the characters working in the rubber factory. With very little embellishment, it is exactly as my mother described working in the factory, even the part about being ashamed to work there. She didn't want anyone to know.

By 1920, there were more people in Akron, Ohio born in other states or abroad than were born in Ohio. Akron's growing Tower of Babel overflowed with Austrians, Hungarians, Poles, Germans, Italians, and people from West Virginia, Tennessee, and Kentucky. The number of West Virginians living in Akron reached almost nineteen thousand—close to ten percent of the population.

I asked my mother if she remembered all the people coming into Akron at the time. She said, "Do you mean the 'barefoot people?'" Apparently that's what they called the Appalachians pouring into town. The only reference of that term was from my mother.

I did exhaustive research into the times, and I believe that is reflected in the novel.

The cover of the book is a photo of my father, my uncle, and their friend.